When I first started writing this blog, my first post was on my favorite bowls. I love bowls. I think I’ve established that in subsequent posts. In that first post, one of the bowls I showed was this one …

Robinson Ransbottom Bowl Girl With Watering Can circa 1930s

It will never be put up for sale in my shop because I love it too much. And here is the other set I love and will not part with. I had to wait 6 months from the time I found this set at “A Well Kept Secret” in Kingston, NH, to when it went on sale almost half off. From there I talked them down another $10 while I hoped against hope someone else didn’t scoop it up! Also, because it is my favorite set 😉 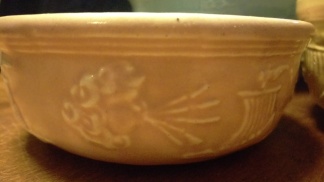 Close up of relief on Zephyr mixing bowl

Can you see why I can’t part with them? How many sets do you see like this from the 1940s that are in great shape, no cracks or chips AND together like this? You don’t — so I’m keeping them. I sell many pieces of vintage pottery in the Vintage Eve’s Etsy shop, but this set will not be one of them. Below is a cool poultry fountain by Robinson Ransbottom. They have a rich history.

Robinson Ransbottom Pottery was started in 1920 in Roseville, OH. You have to go further back to understand where they actually started, though. According to a source I go back to frequently, Lehner’s Encyclopedia of U.S. Marks on Pottery, Porcelain and Clay (1988), it began further back in 1856 with Whitmore, Robinson and Company. From 1862 to 1900 this company made stoneware, yellowware, and Rockingham.

Let’s go back slightly. There were 4 Ransbottom brothers who founded a pottery in Ironspot, Ohio. They also ran a pottery in Saltillo, Ohio where they  manufactured stoneware jars. In 1910 they combined all their efforts into the Roseville plant. By 1916, the Ransbottom Brothers Pottery were the number one maker of stoneware jars in the U.S. Not too shabby!

The Ransbottom Brothers Pottery also made jars for preserves, churns, milk pans or bowls, poultry fountains and other utilitarian items. Many times the Robinson-Ransbottom pieces are marked just “Roseville” which causes confusion among collectors. There is a different “Roseville” that people collect and it looks different, the colors are more matte and pastel. The Ransbottom pieces are high gloss for the most part. Look at this matching piece to my beloved bowls I found for sale at Etsy! It’s a small milk pitcher.

Well, Robinson Ransbottom had a nice long run, but unfortunately went out of business in 2005. And so is the history of another great company that employed hundreds of potters over the years. A number of their pieces seem to be unmarked having lost their paper stickers as time passed. I would recommend the  Lehner’s Encyclopedia of U.S. Marks on Pottery, Porcelain and Clay (1988) to get a look at all the different marks they used; there are over 20. Check your library for the book or Amazon (which is where I got mine in perfectly used condition).

I hope you all have a great week! I will be partying at the link parties to the right this week. Check them out if you get the chance. And as always, leave me a note if you liked this post because I love to hear from everyone!

5 thoughts on “Some of My favorite Things – RRP Co.”