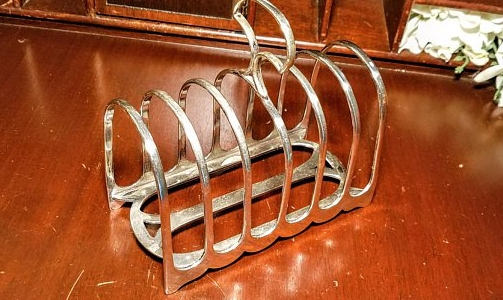 I recently added to the Vintage Eve’s shop, and quickly sold, a lovely little silver-plated toast rack. In researching how to price it, I saw so many pretty toast racks it made me wonder how far back these go? Also, when did they actually start making toast? So of course that led me to when did they decide they needed a rack to stand them up and why?

Here is a picture of the toast rack that started this short jaunt.

The top is a little squished, but it is almost 100-years old, and one must forgive some flaws in a piece that old. Here’s a unique one in Lusterware from the 40s.

According to a New York Times article, toast has been around for awhile. It comes from the Latin “Torrere” which means “to burn.” While burnt toast isn’t the ideal, they actually originally used toast to flavor alcohol. They usually used stale bread that would hold up to toasting in the fire. They had toasting forks so they could hold the toast in the fire until it was just the right color.

The first toast racks seem to have come into existence sometime in the late 1700s, that comes from a mix of different sources. They all seem to agree that the 1770s is about the right time. They were simple devices at the beginning, just wire soldered to a tray type of thing. They got more elaborate as people started using them.

They were used because it kept the toast from getting soggy and the crumbs would get caught in the tray, keeping everything neat and tidy. There are some really wonderful examples of toast racks out there.

People tend to use these as letter holders these days, or they did until email took the place of snail mail. Time marches on, you know. I’m sure we’ll find another use for these. Maybe we might even go back to using them for toast!

I hope you’ve enjoyed this foray into toast racks. Enjoy your week!

I really love finding stuff I’ve never heard of before. Some of the pieces on this blog have caused me to really look deeper into the origins of pieces, which is what I also love. So recently, I came across these pieces. Other than just being an absolutely beautiful design, they were by a designer I was not familiar with, Sascha Brastoff.

These saucers are a pinky-purple mixed with gold on an eggshell color base. The pattern name is Surf Ballet, which, let’s face it, is an awesome name. And it also looks like the foam from the ocean as it’s churned with a gorgeous sunset. That’s why I grabbed them for the store. They were too pretty to leave them languishing in a cupboard.

So who is Sascha Brastoff? It turns out he was a very popular designer of Mid-Century Modern ceramics and was very prolific during the 1950s and 1960s. He was born in 1918 in Cleveland, Ohio. He entered WWII going into the Air Force. When he got out, he actually worked for a while at Twentieth Century-Fox as a costume designer.

In “Made in the Twentieth Century: A Guide to Contemporary Collectibles” by Larry R. Paul, Sascha opened Sascha Brastoff Products, Inc. Then opening a ceramics plant in West Los Angeles in 1953, introducing his Rooster trademark that same year.

One of my favorite resources on American pottery, “Lehner’s Encyclopedia of U.S. Marks on Pottery, Porcelain & Clay,” by Lois Lehner, says this plant covered a full block and operated from 1953 to 1973. Sascha himself did all of the designs and then let his staff of about 20 people execute them under his supervision. A brochure that went out with some of his designs stated, “In his southern California studios, Brastoff has labored toward a double objective – the bringing of fine art into everyday living.” (Lehner, p. 55).

That epitomizes what he was trying to do. Don’t forget that coming out of the war, after all the rationing and foreign imports of ceramic wares were being cut off, there was a big demand for ceramic wares that were beautiful and functional. Add in the post-war building boom, and you can see the proliferation of American pottery that looked toward the modernist future but was also functional in order to furnish those new homes. Brastoff was able to fulfill that role.

His pieces cost from $25.00 and into the thousands for pieces that he himself produced. As far as the marks are concerned, his rooster mark with “Sascha Brastoff” underneath has been used since around 1953. That mark can be a gold sticker or backstamp. Another backstamp, “Sascha B.” which means he supervised the making of the piece. If he signed his full name in script “Sascha Brastoff,” it meant he did the piece himself from beginning to end.

There are also both of those “Sascha B.” and “Sascha Brastoff” in block letters as a backstamp. Both of those were stated to be in use since 1952 but specifically on a line of pottery designed by Sascha for B. Altman Company (Lehner, p. 17). According to Venice Clay Artists, Stangl and Royal Haeger were also licensed to use his designs. There’s usually a thick, “SB” on the piece designating the designer as Sascha Brastoff.

Unfortunately, Sascha left his plant due to ill health in the 1960s. The plant closed in 1973 and he passed away in 1993, at the age of 75. He definitely left his mark on Mid-Century Modern pottery and his pieces were as highly prized then as they are today. If you think about a $25.00 piece in 1960, it would be like spending over $200 for a piece of pottery today when the average yearly family income was only $5600. I always find these figures remarkable. So that is the story of Sascha Brastoff and his gorgeous designs. 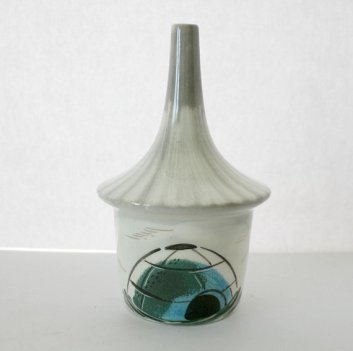 I hope your upcoming week holds lots of good things! I’m in the Northeast enjoying a well-deserved Spring and excitedly watching the early flowers bloom. Thanks for reading!